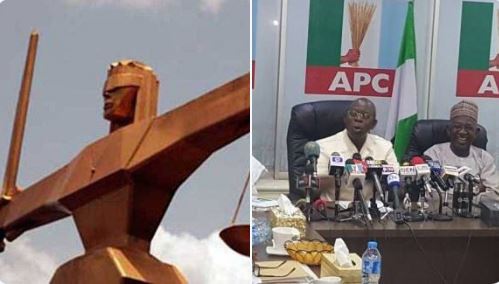 The Federal High Court in Abuja on Monday dismissed a suit challenging the decision of the All Progressives Congress to adopt indirect primary for nominating its candidate for the forthcoming November 16, 2019 governorship election in Kogi State.

The National Working Committee of the party had announced that it will adopt indirect primary to elect its candidate for the governorship election slated for November, a decision that did not go down well with some aspirants.

The judge, Justice Taiwo Taiwo, upheld the preliminary objections filed by the APC to challenge the suit, in ruling that the suit had been caught by the statute of limitation.

He said it was needless to go into the proprietary of the party’s choice of indirect primary since the court lacked the jurisdiction to hear the case on merit, having been statute-barred.

He held that the suit, marked FHC/ABJ/CS/883/2019, was a pre-election matter which ought to have been heard and determined within 180 days as provided by Section 285(10) of the Nigerian Constitution.

According to the judge, although the suit was filed only on July 18, 2019, it was clearly premised on another one marked FHC/ABJ/CS/833/2019 which, instead of being determined within 180 days, was only ruled upon on Monday.

The judge, on the grounds of statute limitation, in the earlier judgment on Monday, dismissed the said foundational suit which was instituted by the Chairman and Secretary of a parallel executive committee of the APC in Kogi State, Haddy Ametuo and Tam Adejoh, respectively.

The said foundational suit was instituted against the APC, and Abdullahi Bello, who is the Chairman of the Governor Yahaya Bello-backed faction of the party in the state.

The primary is expected to hold on 29th of August.