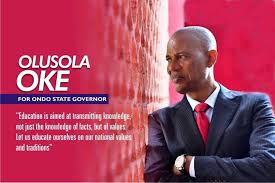 The Ondo state All Progressive congress (APC) factional group popularly know as the Unity forum has announced cheif Olusola Oke as their consensus candidate for the October 10th Governorship election in the state.

The group in a statement made available to journalists on Tuesday said the decision was unanimous among all candidates under the auspices of the forum.

Below is the full text of the statement Unedited:

Gentlemen of the press, considering the mood of the state and continuous ban on political meetings and the fact that INEC has given its nod for electronic campaign, we hereby present to the public the long awaited report of the Ondo APC Unity Forum concerning its governorship aspirant for the 2020 governorship election in Ondo state, as presented by the Gubernatorial Candidate Selection Committee.

agreed to accept the candidate recommended by the Committee. However, one of the Aspirants insisted that he must be convinced that the process would be credible.

Consequently, on March 24, 2020, six members of the committee met and one was unavoidably absent. They debated on the issue of presenting a candidate in line with the Committee’s terms of reference and the concurrence of the aspirants.

We thank the leader of Unity Forum H.E. Alhaji Alli Olanusi and the members of the forum for giving us the opportunity to serve in this challenging task of selecting a candidate for the forum.

Charms, Weapons Intercepted As Northern Youths Made Influx Into Osun for Illegal Mining