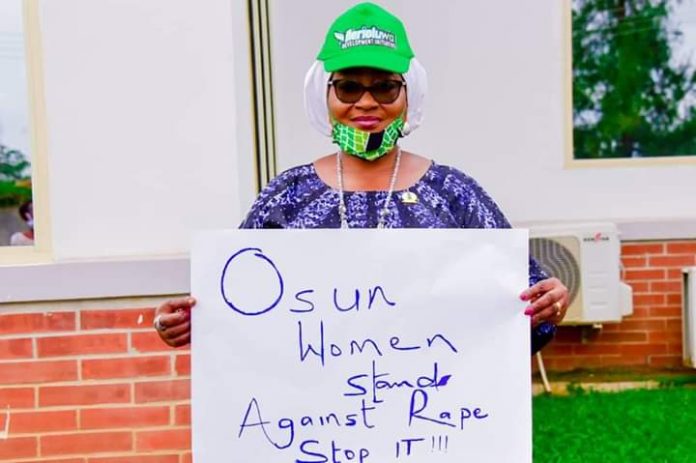 In futherance of her campaign against rape in Osun, the State of Osun House of Assembly will on Wednesday 24th of June have in audience the wife of the Governor, Mrs Kafayat Oyetola.

The Speaker, Rt. Hon Timothy Owoeye during plenary on Monday intimated the Assembly of the request for a courtesy visit by the first lady to the House of Assembly necessitated by the increasing rape cases in the country.

The wife of the Governor commended the State House of Assembly for the immense legislative work being done to ensure that the people of Osun derive optimal democratic dividend and for passing the bill against rape and sexual violence long ago in the state.

The letter of the first lady read in part, “Rt. Hon. Speaker, the incidences of rape, sexual violence and abuse in our society has assumed a dangerous dimension to our women and girls and even our responsible men.

“Reports emerge daily about the cases of rape and killing in various forms and dimensions. The situation has called for concerted efforts of all stakeholders to put a stop to these activities of some criminal elements in our society.

“A lot of work has commenced on awareness drive in our state in addition to the mobilisation and intervention programs being carried out under the office of the First lady”.

Recalled that the Criminal Code Cap 34 Vol. 2, Laws of Osun state, 2002 prescribes a life sentence on anyone found guilty of committing rape while an attempt to commit rape attracts an imprisonment of fourteen years.

The State House of Assembly had also directed that the Director of Legal matters for the Assembly must be present at all rape related cases in Osun courts.