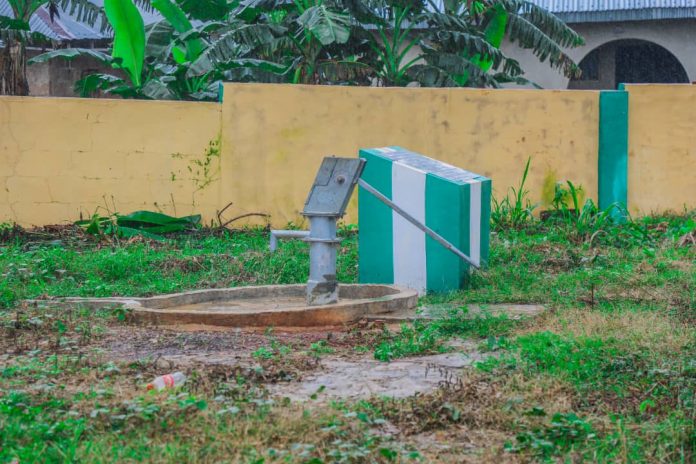 A multi-million naira motor park and water project have been abandoned in Ijebu-Jesa , Oriade Local Government of the State of Osun .
The project, which was sited along Esa-Oke road axis of the town comprises of an expansive motor park, equipped with modern facility, including a hand pump borehole was constructed by Adedoyin Ajifolokun Memorial Foundation (AAMF). The project was subsequently commissioned on Friday, November 22, 2019 by the Osun State Deputy Governor, Benedict Alabi.

The Chairman of the Foundation, Prof. Oyewole Ajifolokun, said during the commissioning of the project that the provision of the motor park and borehole system was one of the several projects instituted to immortalize his late father (Pa.Adedoyin Ajifolokun ) to entrenched his exemplary trait of service to humanity while alive.

He added that the motor park was constructed to assist National Union of Road Transport Workers (NURTW) to have a decent and safe working environment with necessary facility of comfort. The park according to him would also make transportation much easier and prevent unnecessary accidents that may occur when citizens of the city hail taxis or walk on the road to take a cab for intra-city transportation. Prof. Ajifolokun stated that it was a gesture painstakingly conceived by the Board of AAMF and Chairman of Oriade Local Government.
Meanwhile, some of the residents of the community have noticed and decried the way the project has been abandoned and practically underutilized despite its strategic location and modern equipment provided to make the place efficiently functional. A resident who simply identified himself as Ojo, said the project was supposed to be a great relief to the NURTW if properly maintained especially with the well-constructed sheds and availability of borehole within the park that guarantee uninterrupted water supply not only to the NURTW and the motorists but to the near by residents of the area. “ I think our leaders need more orientation on how project of this nature could be maintained and carefully handled for sustainability” he further said.
In the same vein, a retired teacher who lives close to where the motor part was situated, Mrs. Modupe Joel, expressed displeasure in the way the project was abandoned and called on the Chairman of NURTW to reciprocate the good gesture by moving his members to the new site and properly utilize the facility to encourage other philanthropist to do similar projects. According to her “the only way we can convincingly appreciate the Foundation for the wonderful opportunity is for the NURTW to make good use of the facility. She therefore calls on the Chairman of Oriade Local government, Hon.Bunmi Obeisun and the Elegboro of Ijebu-Jesa, Oba Olufemi Agunsoye to immediately prevail on the NURTW chairman to move his members to the new motor park.
All efforts by the writer to speak with Hon. Obeisun and NURTW chairman to provide reasons for the abandonment have proved abortive.