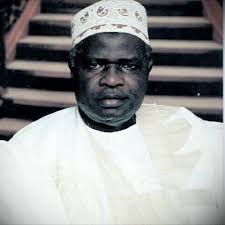 One of the finest human beings that I have ever met across the River Niger was Alhaji Umaru Shinkafi, the immutable Marafa Sokoto who transited to the great beyond exactly four years today. May Allah continue to rest him in the best of paradise Aljeanah Firdaous.

I knew Alhaji Shinkafi through his soulmate, the late Alhaji Abdulazeez Arisekola Alao, the Are Musulumi of Yorubaland in the 1980s. He was a well trained policeman with crack intelligence acumen. He was the CP in Oyo state at a time. He later became National Security Organization (NSO) Director, later Federal Commissioner for Internal Affaires and all of other preferment that anyone could aspire to have. Handsome, urbane with dignified comportment, he was at home with Yoruba culture as he was with Igbo, and of course with his traditional Hausa/Fulani home base.           He was highly detribalised and very sociable.

In 1998, Alhaji Umaru Shinkafi was our Guest at Sultan Bello Hall Distinguished Lecture series and he gave a whooping N500,000 at that time on behalf of friends without their previous consent. He redeemed the pledge immediately. In 2010 when he chaired my daughter’s wedding reception against all odds, as I had captured elsewhere, he secured a sum of N5.5m from the Governments of Sokoto,  Zamfara and Kebbi through my contact for the same Sultan Bellow hall, University of Ibadan. When he took ill in January 2016 or thereabout, I visited him at the renowned First Cardiology Hospital, Lagos. I was the only person allowed to see him apart from the family members. I shook his hands and wept uncontrollably.

Few days later, he was moved to London where he eventually died on July 6th. Expectedly, I was present at the burial in Sokoto. The then Minister of Health,  Prof Isaac Folorunso Adewole (IFA) immediately approved that the authorities of Usman Dan Fodio University Teaching Hospital should take up my hospitality arrangements when he saw my “unquatifiable commitment to friendship” as he reffered to, few days ago on my birthday. In 2014, Alhaji Shinkafi with his daughter,Fatima , was at the burial of his best friend, Alhaji Arisekola even though he was already “getting tired” judging by his gait. I was at the Hubare where the great men of the Sokoto caliphate were interred and I was probably the only person with my type of cap allowed into the hallowed grounds.

Marafa Sokoto was an excellent person to be with at anytime, any day. May his kind soul continue to rest in perfect peace. Aamin.

Charms, Weapons Intercepted As Northern Youths Made Influx Into Osun for Illegal Mining

Featured Oluwapelumi Fasoyin - August 10, 2020 0
The Joint Admissions and Matriculation Board has announced a new date for 2020/2021 post-Unified Tertiary Matriculation Examination screening. It...