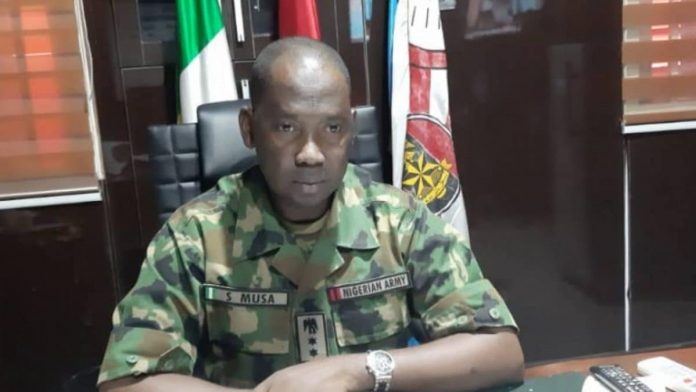 The Nigerian Army has confirmed the death of a senior soldier killed by his colleague officer on Wednesday.

According to the Nigeria Army the soldier is suspected to be suffering from depression which made him open fire on a Senior Army Officer, killing him on the spot.

The incident happened in Borno but the identity of the deceased was not disclosed by the Military.

The suspect, whose identity was not also disclosed, is a trooper of the Nigerian Army serving in 202 Battalion of 21 Special Armoured Brigade Bama, Borno.

A statement by Acting Director Army Public Relations, Colonel Sagir Musa, reads: ” A trooper of the Nigerian Army serving in 202 Battalion of 21 Special Armoured Brigade Bama, Borno State, went beserk at about 1030 hours on the 29th of July 2020 and fired at an officer (a Subaltern) which led to his death.

“The incident happened when the soldier approached the officer who was standing in front of the Unit’s Headquarters making a phone call. The soldier has been arrested, is in custody undergoing investigation. General situation in the unit is calm.

“The remains of the deceased officer have been evacuated to 7 Division Medical Services and Hospital.

“Investigation into the case has since been instituted to determine the circumstances that led to the unfortunate incident.

“The family of the deceased has already been contacted. The Nigerian Army sympathises and condoles with the family at this trying moment, and pray to the Almighty God to repose the soul of the departed and grant his family and other loved ones the fortitude to bear the irreparable loss. May his gentle soul rest in peace.”