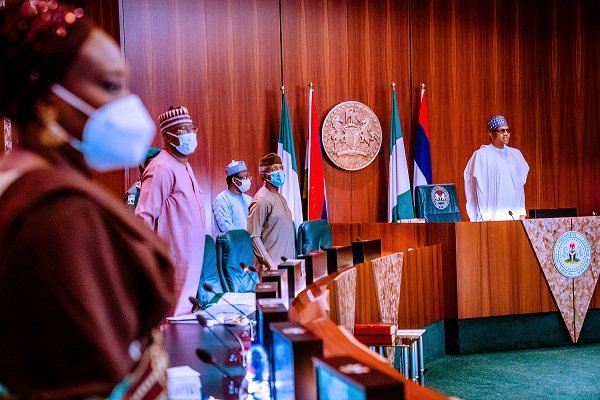 President Muhammadu Buhari on Monday has directed all Ministers aspiring to be President in 2023 to resign immediately.

The President singled out the Minister of State for Education, Emeka Nwajiuba for braving the odds to quit to avoid conflict of interest.

But other Ministers seeking to be Governors, Senators and House of Representatives members have failed to resign.

They were busy trying to seek clarifications on the issue to see if they were affected.

President Buhari said he had received the resignation of Nwajiuba, the minister of State for Education who is also seeking to be President.

He said: “I expect other members of this council seeking to be President to resign with immediate effect.”

A source in the cabinet said: “We were not clear if this directive will affect other ministers aspiring to be governors, Senators and House of Representatives members.

“We are expecting more clarifications soon.”

Some of the aspirants include Governor of Central Bank, Mr. Godwin Emefiele; the Minister of Transportation, Rotimi Amaechi, the Minister of State for Petroleum Resources, Mr. Timipreye Sylva and the Minister of Niger Delta Affairs, Sen. Godswill Akpabio

The issue of the resignation or Otherwise of members of the Federal Executive Ciouncil with Presidential and Other ambitions in the 2023 Elections have been raging for sometime.

This especially became more pronounced following the controversy that surrounded the passage of the contentious section 84(12) of the Electoral Act 2022.

Aside the Minister of State for Education, Chukwuemeka Nwajiuba, who had resigned his appointment before to day, many members of the Federal Executive Council have also indicated interest in succeeding President Muhammadu Buhari in 2023.