...says 'award is a challenge to impact more on humanity 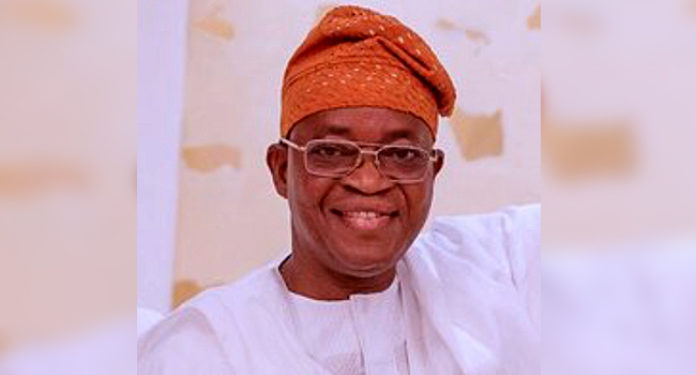 The Osun state Governor, Adegboyega Oyetola  on Friday,  was crowned the Vanguard Newspapers’ Governor of The Year 2021 for Good Governance.

He received the award at a colourful event tagged ‘Vanguard Personality of the Year 2021 Award’ which held at the Eko Hotel and Suites, Lagos.

The governor described his latest award as a challenge to impact more on humanity just as he dedicated it to the people of Osun for giving him the opportunity to prove that governance can be done better with utmost fear of God and for the sake of humanity.

According to the management of the Vanguard Newspapers, the choice of Governor Oyetola for the Good Governance award was basically on empirical facts and indisputable statistics on the geometric transformation that Osun and her people had witnessed under his watch since assumption of office.

It explained that the philosophy of the award is to recognise and celebrate excellence, national pride and service to humanity.

“Since assumption of office you have delivered the dividends of democracy without loans. It is on record that you have prudently managed available resources while your Administration has kept faith with the people and maintained fidelity with your electoral promises.

“We also noted the crisis in the education sector and how brilliantly the Governor has resolved it. One other thing we have seen is the character of Mr. Governor: no crisis, no rancour. In fact, we have seen the highest level of decorum in governance.

“Generally, this nomination for the award of Governor of the Year for Good Governance is actually an encouragement award on how the Governor has raised the pedestal of governance for the people of Osun and beyond,” the award organisers added.

Speaking shortly after receiving the award, Governor Oyetola thanked the management of the Vanguard Newspaper for recognising the modest achievements his administration had made to transform Osun. He dedicated the award to the people of the State for giving him the opportunity to serve them.

Oyetola said: “I am highly elated to accept this award of Governor of the Year for Good Governance by one of the nation’s frontline and integrity-savvy newspapers. This a reward for hardwork and I accept it wholeheartedly.

“Ordinarily, good governance in itself answers to unblemished demonstrable service to the people and its factors for service are economic buoyancy, transparent and inclusive governance, equitable service delivery and political will; and all are seemingly mutually inclusive.

“However, achieving good governance and winning nomination in a depressed economy in a country where some of the competitors are way richer than us, makes our story somewhat different.

“We came in when no one gave us a chance. We inherited a financially challenged State and one that could not pay its bills. We were however resolved to make a difference. And the difference we have so far made through prudent management of resources, including plugging waste and cutting costs.

“Through creative and innovative alternative project funding, we have built and rehabilitated roads that had been abandoned for three decades or more.

“Our service distribution is anchored on quality and equitable service delivery. From infrastructure to health and education, security to welfare, projects and service have been equitably distributed to all the wards in the nine Federal Constituencies and three Senatorial Districts of the State.

“In these three and a half years that we have been in the saddle, we have proved as a government that good governance and service delivery is possible in a depressed economy; that we can execute projects without borrowing; that we can look inward to pay salaries.

“We have spent over three and a half years in government building a solid foundation for a sustainable economy. The remaining years shall be spent to build bricks that will deliver a strong and prosperous Osun and a happy and productive people. This is our mission in government. This is the least we owe our people.

“I, therefore, dedicate this award to our people wherever they are, for giving us the opportunity to prove that governance can be done better with utmost fear of God and for the sake of humanity.

“To the staff and management of Vanguard Newspapers, we thank you for recognising our modest achievements as we continue to keep our eyes on the ball. We appreciate you for giving us this award to encourage us to do more”.

Earlier in his remarks, the Chairman of the occasion and former Governor of Akwa Ibom State, Obong Victor Attah, lauded the leadership of the newspaper for promoting excellence, hard-work, competence, integrity and character through it daily reportorial and yearly award of excellence.

Attah also charged Oyetola and other awardees to continue to be the source of inspiration and perfect examples for those behind.